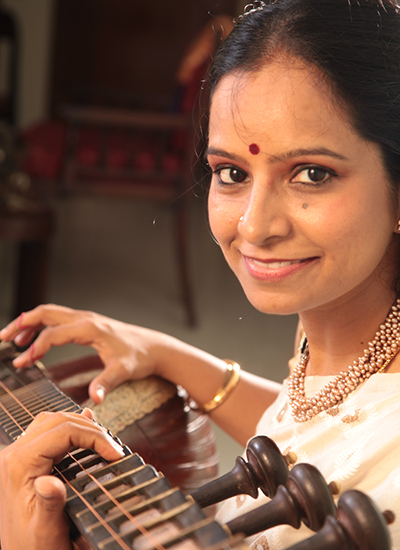 Dr.Jayanthi Kumaresh is India’s torch bearer worldwide for Saraswathi Veena, the National Instrument of India. An artiste, collaborator, composer, researcher, creator, pioneer, and educator, her life achievements over 35 years, truly embodies the rich musical heritage of India, making her one of the legendary Veena masters that India has ever produced.

She has received many awards in India such “Sangeetha Choodamani”, “Kalaimamani” by the Government of Tamil Nadu, “Veena Naada Mani”, “Kala Ratna”, “Sathyashree”, “Gaana Varidhi”, is an ten-time recipient of The Music Academy, Chennai’s “Award for Veena”, “Sangeet Shikar Samman”, “Indira Sivasailam Endowment Medal”, to name a few. As a pioneer in her field, Jayanthi has presented Veena to audiences in every corner of the world in different formats.

Apart from her solo concerts, she has performed with legends such as Ustad Zakir Hussain and has presented duets and north-south jugalbandhis with several other maestros. Her 45 Ragas is one of the first ever one-artist, one-instrument live concert non-stop for 124 minutes. Her Story in Concert is an integration of different art forms in one production where story-telling, music and painting all come under one umbrella. She is the founder of the Indian National Orchestra, featuring 21 star musicians from all over India – first of its kind orchestra for Indian Classical Music. Her album Mysterious duality is a path- breaker where one artist, one instrument have created a philharmonic effect. Her web series, Cup O’ Carnatic, which popularizes Carnatic music in general and Veena in particular has more than 2 million views on social media.

A researcher, she holds a Doctorate for her works on “styles and playing techniques of the Saraswathi Veena”. Her series of talks and lecture-demonstrations in various Universities and schools and several TEDx talks have made her a sought-after ambassador of Indian Music among the younger generation. As a composer, she has composed and created music for many musicals, dance productions and documentaries.

Her rich lineage of music can be traced back six generations and her prodigious musical journey began at age 3 under her mother Vidushi Lalgudi. R. Rajalakshmi. She then left home to live with her guru Vidushi Padmavathi Ananthagopalan for 22 years and learnt the intricate science and art of playing the Veena. Her playing technique was further enhanced under the tutelage of Veena Virtuoso Dr.S.Balachander.

Dr. Jayanthi Kumaresh has dedicated her life to the Saraswathi Veena. Her playing style truly brings out the voice of the Veena, in terms of originality in content, technique, virtuosity and expression that transcends the boundaries of language and region. 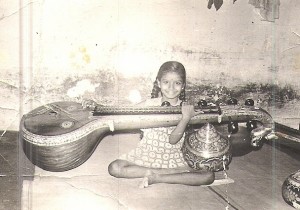 With music in her genes and music all around her, young Jayanthi took to playing the veena at the age of 3. Her mother, violinist Lalgudi.Smt. R. Rajalakshmi initiated her into music. Amidst a family of violinists, she chose a different path – to become a Vainika, a veena player. Her single minded focus to master this instrument made her leave home and go live with her aunt and guru. Smt. Padmavathy Ananthagopalan at the age of 13. Growing up, Jayanthi’s days were packed with practice, training and more practice with schooling in between. During her learning days, every evening’s schedule was to play in front of an imaginary audience and errors would be noted down, so she can revisit those after dinner. Her Great Guru, Smt. Padmavathy Ananthagopalan, is a great task master and disciplinarian. Under her tutelage, Jayanthi was able to understand and imbibe the true essence of veena and music which the “gurukulam” style of learning offers (staying with your guru throughout your learning years). It was a rigorous training focusing on content, technique, grammar and expression.

Soon Jayanthi got an opportunity to receive guidance under the Veena Virtuoso Dr. S.Balachander. Guru Smt. Padmavathy Anathagopalan greatly revered his playing style and music and was very happy when Jayanthi was blessed with this opportunity.

Jayanthi learned to emote better with the veena and fine-tuned her technical sophistication under Dr.S.Balachander’s guidance. Embellishing her playing techniques and exploring the horizons of a raga were more on the lesson plan than learning new compositions. The genius that Dr. S. Balachander was, he helped her discover the nuances and beauty of the veena without ever expecting her to follow his style. This led Jayanthi on a path to evolve her own unique playing style – her own identity.

She is one of the privileged few to have performed with him on stage. He made her realize that if something cannot be played on the veena, it’s only the limitation of the player and not the instrument. 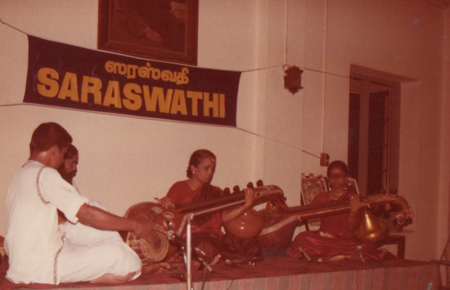 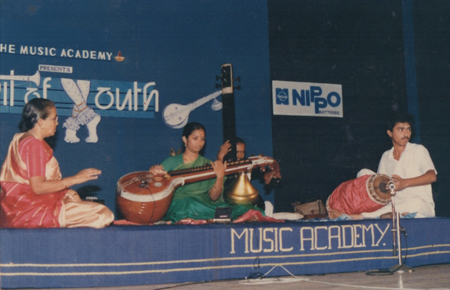 Jayanthi started performing at the age of 15. She performed along with her Guru Smt. Padmavathy Ananthagopalan and she also gave many solo recitals.

She teamed up with two other wonderful artistes Lalgudi Vijayalakshmi and Sikkil Mala, all in their teens at that time and gave a series of Violin Venu Veena concerts. The trio women were guided by her maternal uncle the Violin Legend Sri. Lalgudi Jayaraman during these concerts. At this period Jayanthi was also fortunate to accompany Dr. S.Balachander during some of his concerts. 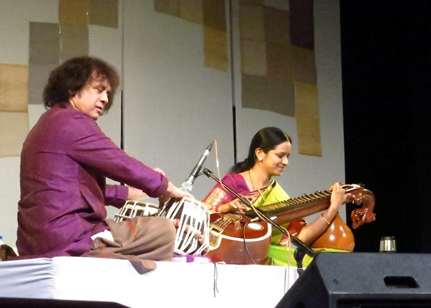 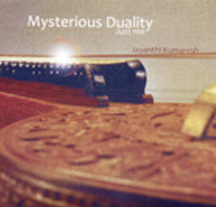 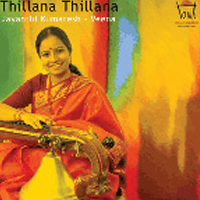 Jayanthi has composed music for several dance productions and musicals. Her music for the dance ballet Krishna Bhakthi for Rasika, Portland featured both the Carnatic and Hindustani styles of compositions. She has scored background music for several documentaries. She has also created original music scores for productions like Jagadguru Adi Shankaracharya, Abbakarani, Rithu Soundaryam to name a few.

Apart from this she has composed individual pieces like Thillanas, Varnams and Raga based melodies that have been featured in many of her albums – Thillana Thillana, Vipanchi and Mysterious Duality.

She has recorded several albums with many companies around the world like Times Music, Music Today, Sense World, Earthsync, Navras, Home Records etc.

The Veena – so much mysticism surrounding this wonderful instrument which is believed to have existed since the Vedic times. Having played the veena from the age of 3, Jayanthi believed it was imperative to know more about its origin and evolution and set out on a research journey.

She started her research from the basic human skull the first ever resonator to be used by Man all the way up to the modern digital veena.

She focused on the four Southern states in India – Tamil Nadu, Kerala, Karnataka and Andhra Pradesh. Jayanthi learnt that the Veenas made in the four states are different from one another and each state has distinctly different styles of playing the same instrument.

During her six years of in depth study, she traced the various practitioners of each style and studied their training, technique, expression and unique performing specialties.

Extensive documentation, audio samples, photography and interviews formed the fabric of this research.

Jayanthi earned her Doctorate from the University of Mysore for her Study on Different Styles and Playing techniques of the Saraswathi Veena. 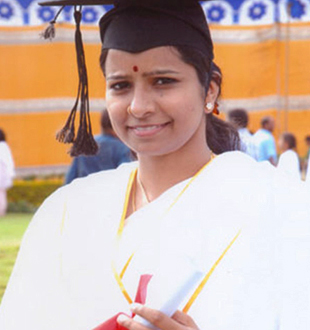 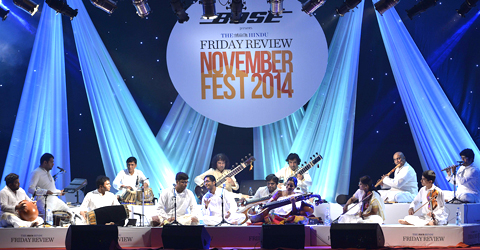 Mysterious duality, the album that Jayanthi conceptualized and recorded for Earth Sync, is a unique project where a single artiste has recorded seven overlapping layers of her veena tracks to create symphonic compositions. It is a multi-dimensional reflection of the simple yet complex self, expressed through a single instrument, the Veena. She has fully explored the musical range of the veena with her exceptional mastery over the instrument. The result is an original and vibrant album that has found rave reviews worldwide.

Listen to a sample audio

Jayanthi is the founder of the Indian National Orchestra that features 21 star musicians from all over India, in a first of its kind National Orchestra for Indian classical music. “To take music from every corner of India to every part of the world” is the goal behind Jayanthi’s brainchild. INO goes beyond existing compositions and creates new ones specifically for their orchestra that represent India’s heritage and culture. Learn more

Story in Concert is yet another unique attempt of Jayanthi where she collaborated with a story teller and presented different forms of concerts for varied age groups. The story is woven into the structure of the concert and unfolds itself in layers thereby making it a very rich experience for audiences at different levels.

Jayanthi has presented the Just Me concept in concerts where she renders 45 ragas non-stop for over 3 hours featuring Just the Veena.

Having a performance career spanning 3 decades, Jayanthi spends a good portion of her time sharing music with students at home and abroad, one on one and through her Master classes, workshops and lecture demonstrations to large audiences. In collaboration with the ethnomusicology department of many U.S universities, Jayanthi toured coast to coast to explain, through workshops and recitals, the richness of this 2000 year old traditional Indian music.

She has also collaborated with organizations such as SPICMACAY and BHOOMIJA to help promote Indian Classical music among children and Youth.

She regularly guides students of Indian Music in the UK through Milap fest, Bharatiya Vidhya Bhavan and Vani fine Arts. She has made multiple visits to Norway as part of an education series to demonstrate and explain Indian classical music in schools.

She has presented a lot of lecture Demonstrations on the Subjects such as Introduction to Indian Music, Styles of Playing the Veena, The Origin and Evolution of the Saraswathi Veena, The Story of the Indian Veena and the like. 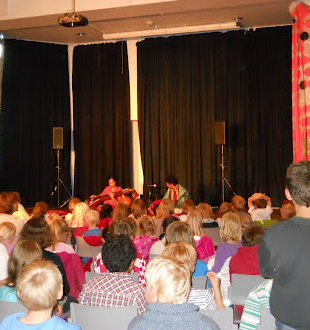 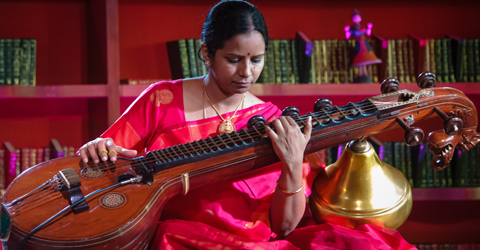 Her mission is to establish a world class research Centre for this National Instrument of India, the Saraswathi Veena which will have an extensive audio Video library with state of the art facilities for recording and practice. It will showcase the craftsmanship of the great Veena makers of the past.

Jayanthi’s music is a unique blend of classicism and innovation. Her mastery over the instrument and her ability to bring it’s the richness without compromising the finer nuances of music has made her one of the best in her field. Her contributions to spread the melody of the veena around the globe continues…