Saraswathi Veena goes to the moon!
by admin on February 12, 2020 in Concert Reviews Thoughts

Sarawathi Veena goes to the moon!

I was invited to be a part of the musical representation of Chandrayaan, composed by the wonderful composer Shantanu Moitra ji, along with a galaxy of wonderful musicians such as Kaushiki Chakraborty ji, Rakesh Chaurasia ji, Ambi Subramaniam ji, Ojas Adhiya ji and Sridhar Parthasarathy ji. I wasn’t sure what this journey ahead was going to be like. How would we make people from various genres fit into one theme, how were we going to play together and convey the launch of Chandrayaan?

Shantanu Moitra ji had a big master plan. He took his time and created each piece and then he shared this with all of us. Then he went to each city that the musicians lived in – Kolkata, Mumbai and it was in Bangalore for myself and Ambi ji. Then he made us play and recorded it. Each musician got to layer on it and it was like the creation of an ornament. Even before we all went to the rehearsals, we knew exactly what to play, how to play and where to play. It couldn’t have been more meticulous than this and we knew what to expect and the story line of a philosophical theme behind Chandrayaan was highlighted very beautifully.

At a superficial level it is a satellite that takes off from earth and goes to the Moon. But on a philosophical level, it is the journey of a man, who leaves home, trying to break away from his bonds, going into an orbit, trying to find his space and then going to a space where there is no gravity. He is on his own. He has lost contact with his own people. It is yet not accepted by the place where he is going – that suspended animation – and how he breaks through that and then how he goes beyond his destination – it could be his ultimate destination or it could be a particular goal mapped and how he looks back at where he came from and how he lands where he is enriched. It is a journey of a man’s life, it is the journey of a soul, it is the journey of a satellite. There are many layers to this. 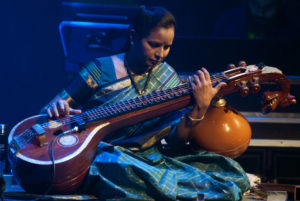 One needs to be a great artist to even conceive something like this. As someone wisely said, “an artist doesn’t see things as they really are. For if he did, he wouldn’t be an artist”. This is so true in the case of Shantanu Moitra ji who has already come up with such great numbers in several of his films, particularly Parineeta. It was such a pleasure to be a part of this along with other talented musicians who were such great team players. The lighting, the sound and the sell-out show at NCPA Mumbai on 18th January 2020 were all indicators that this was one successful story.

I was really honoured and privileged to be a part of it and more and more when we do team events, these are opportunities for us to learn little things on and off stage on how other musicians react, how they approach their work, what music means to each person, how each person plans. More than anything, I was really happy to take the Sarawathi Veena to the moon, to present this majestic instrument to a different audience. I really cherish the music and the experience.