New Zealand and Australia tour
by admin on July 1, 2016 in Travels

The “Strings Attached” concert tour to Australia & New Zealand was surely a very memorable one in more ways than one.

The first thing that strikes you as soon as you land in New Zealand is the natural beauty and the next thing is the cold! Miles and miles of unadulterated greenery, the friendly kiwis, the insect free atmosphere, the space and of course, the cold! I kept my Veena very warmly covered at all times and if I could have played the concert with sweaters and gloves, I would have.  But the reception and enthusiasm of the audience kept us warm. It was a “Strings Attached” tour with Sri. Kumaresh ji and myself.  We played for a full 3 hour and 5 minutes and totally forgot about the temperature. 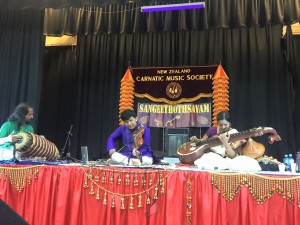 Then came Brisbane, the bright sun shining away and the trip to Gold Coast definitely warmed us enough for the concert there. We chose Kalyani ragam to match the bright weather.  Now don’t imagine a Chennai sun there.  It was bright but nippy.  It was wonderful to see a combination of North Indian, South Indian and Australian audience.

The last concert of the tour was for the Sydney Music Festival in Riverside Theatre. It was a beautifully planned Indian Music Festival for four days.  Jam packed auditoriums, enterprising and efficient organizers, knowledgeable audiences, students, music teachers, friends and family were all there beaming with festivity. The Governor was there to speak a few words before the concert began – a most elegant lady who spoke eloquently.  We thoroughly enjoyed being a part of this festival.  Although Sri. Kumaresh ji and I have individually performed here before, this is the first time “Strings Attached” is performing in this part of the world. 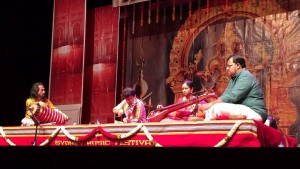 We had an adorable and caring group of hosts, organizers and friends who made our trip unforgettable. Special thanks to our co-artists Sri. J. Vaidyanathan, Sri. Murugaboopathi and Sri. Sundar Kumar.