Theatre de la Ville, Paris 2017
by admin on December 1, 2017 in Thoughts Travels
When music prevails…
Walking into a full house, with everyone waiting for the magic to begin, the stage was set in a grand fashion and the heroine of the day, Saraswathi Veena, sat waiting on stage, covered with a golden shawl. A Carnatic Saraswathi Veena recital at 8:30 pm to a packed audience – no, this is not a Chennai concert I’m talking about – this is a Theatre de la Ville, Paris concert held on Monday 27th November, 2017 at Theatre des Abessess in Paris, France.
I had the most amazing experience performing for this Parisian audience. They thoroughly enjoyed the music and made the entire journey of performing for them, a memorable one!
Joining me on stage were two gifted musicians – Sri. R. Sankaranarayanan on Mridangam and Sri. Trichy Krishnaswamy on Ghatam who enhanced the music that evening manyfold.
The ovation, encore and the warmth from this audience left me humbled. I’m honoured to have presented the Saraswathi Veena whose music went beyond language and region.
Here are a few images from the sound check before the concert, and of course, in front of the Eiffel Tower!
Merci Paris! 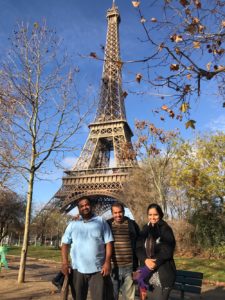